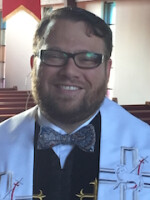 Pastor Hank was born and raised in Fayetteville, NC by his parents, Rick and Pam Bellomy. He has two siblings, a brother, Joe and sister, Stephanie. After graduating from Fayetteville Christian School in 2000, Hank endeavored to Virginia Interment College where he was a two sport student athlete in soccer and baseball and earned a Bachelor of Arts degree in Religion in 2004. Following undergraduate work Hank returned to teach and coach at Fayetteville Christian School. In 2007 Hank began working as the Youth Director for McPherson Presbyterian Church. In 2011 he began attending, as a part of the distance program, the University of Dubuque Theological Seminary. He received his Masters of Divinity in 2015.

Hank was installed at Beulaville Presbyterian Church on June 28, 2015. Hank comes with theological interests in evangelism and mission, Christian education, as well as the in depth study of God's Word. His experience in serving the Church began as a teenager serving in his local body as well as foreign missions. Hank has been on multiple mission and evangelism trips to different parts of the world.

Paster Hank and his wife Amelia have been married for over 10 years and have three daughters, Zoe, Cassandra, and Esther.

Brenda became the secretary of Beulaville Presbyterian Church in January, 2003, after having taught English and journalism for 36 years in the public schools. She is an Elder and Sunday School teacher as well as a member/secretary of the Board of Directors for the Presbyterian Early Enrichment Program (PEEP).

Valorie was born in Portsmouth, Virginia, but raised in Hamlet, NC.  She holds a BA in Music from Wingate University, a BS in Music from Pembroke State University, and a BS in Science from North Carolina State University.  Valorie is a retired music teacher.  She taught in  Duplin County Schools for 33 years.  Currently, Valorie is the Adult Choir Director for Beulaville Presbyterian church; a position she has held for over 20 years.  Valorie loves music and animals -- especially dogs.  She has five dogs of her own.